DETROIT, Mich.–There’s an old joke that the plot of The Wizard of Oz could be summarized as “two women fight over shoes.”

Snarkiness aside, layers of important and complex themes emerge in beloved characters’ quest to see the Wizard. It all began with L. Frank Baum’s novel in 1900, the classic MGM movie in 1939, “The Wiz” in 1975, Gregory Maguire’s novel “Wicked” in 1995, and the musical adaptation of that book that debuted in 2003 and has been playing to packed houses ever since. 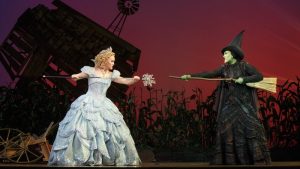 A touring version of Wicked opened its three-week run at the Detroit Opera House to a nearly packed house and thunderous applause.

Wicked is the defining big Broadway blockbuster of a decade – and remains a feast for the ears and eyes. At the core is great storytelling about characters we know and care about. Yet, the classic story that focused on Dorothy Gale has been put through a twister, and lands in fresh ways that could not have been predicted.

We still have the Wizard,  Scarecrow, Tin Man, Cowardly Lion, the flying monkeys, and the Emerald City.

Wicked also gives audiences the previously untold story of what was happening in Oz before Dorothy dropped in.

It chronicles the lives of two young schoolgirls who eventually figure prominently in “The Wizard of Oz.” One is Glinda, the Good Witch of the North (Ginna Claire Mason). The other is Elfaba (a phonetic mash-up of L. Frank Baum’s name), who becomes the villainous Wicked Witch of the West (Mary Kate Morrissey).

Glinda, the Good Witch, is a bratty blond who cares more about being popular than being kind. The masses look to her for direction and comfort, but she hasn’t a clue how to use her wand. (She looks good riding in her bubble, however.)

Elfaba, the Wicked Witch, has good intentions, a strong sense of justice, and exceptional magical powers, but is routinely put down by an intolerant world unwilling to accept her because of her phosphorescent green skin. Disregard what the Munchkins say. The Wicked Witch of the West is just a victim of unfortunate circumstances.

As the play unfolds, we find out why Elfaba is green — but that’s hardly the pinnacle of revelations.

We see that people aren’t inherently good or wicked. More likely, those are labels thrust upon them by others who don’t know the whole story.

As the Wonderful Wizard of Oz (Jason Graae) himself observes, a traitor can appear to be a liberator, a thief looks like a philanthropist, and a crusader seems to be a ruthless invader.

It’s a springboard into an examination of who gets to decide what’s good and wicked and the realization that which label persists into the history books probably depends on who writes the history books.

In Wicked, the Wizard is far from wonderful. He’s working a diabolical plan to enslave Oz’s animal population, and remove their ability to speak.

A political allegory? You betcha.

As I said, Wicked is “The Wizard of Oz” deconstructed.

Music and lyrics by Stephen Schwartz – who also gave us Godspell and Pippin – is fabulous top to bottom. You may find yourself eagerly anticipating the best-known songs “Defying Gravity” and “For Good,” but being astounded by the punch of numbers you’d forgotten about, like “No Good Deed” and “As Long As Your Mine.”

Morrissey was marvelous in the vigorous and vocally challenging role of Elfaba. Her powerful performance of “The Wizard and I” set a high bar of the rest of the show. By the end of Act I, she was literally belting out “Defying Gravity” from the rafters.

Mason was a delightfully flouncy Glinda, stealing scenes with her renditions of “Popular” and “I’m Not That Girl.”

Perhaps the most powerful song in the show is the opening number, “No One Mourns the Wicked,” because – by the time it is reprised at the end – the audience knows that’s a lie.

Jody Gelb was a wonderful word-inventing Madame Morrible, and Jon Robert Hall was a terrific Fiyero, the handsome hunk that captured both witches’ hearts.

Singing and dancing ability of the ensemble was top shelf. Creative costumes, choreography and sets make this production one that will be fondly remembered for a long time.

If you can only see one musical this year, this is the one to see.