‘Totalitarians’ at Theatre Nova brings humor to a tragic Trump

ANN ARBOR—An utterly unqualified aspiring political candidate for state office pairs up with an ambitious campaign manager desperate to launch the rising star that will forever free her from a future of motherhood and the mundane.

There’s some good comic potential there. 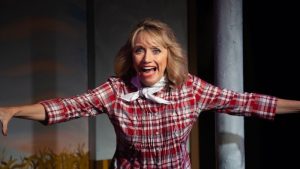 To that mix, playwright Peter Sinn Nachtrieb folds in a terminally ill young man who is consumed in a tin-foil-hat world of conspiracy theories, and his highly suggestible physician, who also happens to be the campaign manager’s husband.

Theatre Nova cooks up Nachtrieb’s cleverly written The Totalitarians as a no-holds-barred political satire that will keep audiences laughing throughout the 1 hour and 50-minute show.

This briskly paced, well-acted and well-staged show also has a bit of a too-close-for-comfort, ripped-from-the-headlines quality. Although this play was first brought to the stage two years before Donald J. Trump was elected president, there are uncanny parallels between his rise to power and the candidacy of the play’s Penelope Easter.

Easter–masterfully portrayed by actress Diane Hill– is dim-witted, tongue-tied, facts-adverse and gaffe-prone. Her best attribute is “great hair. “ Her prior work experience is on the Roller Derby circuit, but she fashions herself as a “misunderestimated” straight-talking political outsider.

Although Easter is clearly somewhat unhinged, she is also charismatic and can deliver a speech of shallow, strung-together slogans in a way that rallies voters – as long as every word she will utter is written down for her in advance.

Campaign manager Francine, brilliantly played by Sayre Fox, knows her candidate is all fluff, yet recognizes Easter has a magnetic quality that charges a crowd—and the power to super-charge her own career.

Pushing her morals aside, Francine revels when an inspiring but nonsensical speech she’s written for the candidate catapults Easter to media darling status and ensures the upward trajectory of both careers. The “we’re on top” good vibes even fuel a tryst between the two.

Hill’s nutty delivery of this game-changing speech is the highpoint of this show.

Joe Zarrow shines in the sub-plot of the doctor, Jeffrey, who yearns to break free from routine and do something important with his life. But he’s failing at the responsibility he has by withholding the fact that patient Ben (Connor Forrester) has terminal cancer for fear of diminishing the young man’s infectious passion for living.

Ben is deeply troubled. His masked diatribes, distributed via the Internet, contend that Penelope Easter is part of a movement whose intent is to turn Nebraska (a suitable stand-in for anywhere) into a dictatorship. His assessments are about as incoherent as Candidate Easter’s campaign speeches, yet the good doctor is sucked in by the conspiracy, and tries to rescue his wife from the campaign.

But Francine has finally found a sense of purpose as Easter’s campaign manager. The only extraction she’s willing to consider is from her marriage to Jeffrey.

Layers of uneasiness are revealed that might be more difficult to imagine if we weren’t living in these times:

Nevertheless, one isn’t left with the notion that The Totalitarians is lampooning a particular political party or politician (although Easter seems to be cast from a Sara Palin/Michele Bachmann mold).

Nachtrieb’s message isn’t clearly stated. To me, The Totalitarians—especially in its final scene with Francine and Jeffrey in bed—seems to make a case for honest substance over superficiality in communications, public and private.

Vulgar language peppers the show, but it is appropriate for older teens.

An unexpected strong point of this show is the side-splittingly funny physical comedy between Zarrow and Forrester in the second act.

I felt almost guilty for laughing so hard during a show that has some profoundly important and weighty themes.