Preview January 30, 2019 David Kiley
GRAND RAPIDS, Mich.–The Pigeon Creek Shakespeare Company will present The Seagull, by Anton Chekhov, in a new version by Christopher Hampton based on the literal translation by Vera Liber, as part of the seventh annual Lake Effect Fringe Festival at the Dog Story Theater in Grand Rapids.  The Seagull will run February 14, 15, and 16 at 8 p.m. and February 17 at 3 p.m..
Chekhov’s play follows the ins and outs of relationships at a Russian country house.  The famous actress Irina Arkadina arrives to spend the summer at her brother’s estate, and jealousies arise when Arkadina’s son Konstantin, a budding playwright, feels threatened by his mother’s new boyfriend, the famous novelist Boris Trigorin.  More complications ensue as a flirtation springs up between Trigorin and Nina, a young woman who aspires to the stage and idolizes the famous writer. 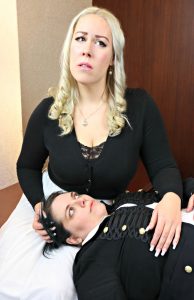 While Pigeon Creek usually focuses their productions on works by Shakespeare and his contemporaries, the company does occasionally branch out into other plays.  This production will be the first time the company has tackled Chekhov.  According to company executive director Katherine Mayberry, The Seagull actually has several connections to Shakespeare.  “Two of the main characters in The Seagull are a mother and son who are an actress and a playwright, and the quote Shakespeare’s Hamlet to each other, so Chekhov put Shakespearean text directly into his play,” says Mayberry.  “The Seagull also contains a play-within-a-play which gets interrupted by rude audience members, much like what happens in several of Shakespeare’s plays.”  Pigeon Creek’s acting company seeks to find more connections between Chekhov’s play and the traditions of theatre passed down from Shakespeare’s time, employing such theatrical practices as cross-gendered casting and thrust-staging.  These kinds of performance conditions from Shakespeare’s time have become a hallmark of Pigeon Creek’s performance style, giving audiences an immersive and intimate experience of classic theatre.
Pigeon Creek’s cast for The Seagull includes actors Chaz Albright, Kathleen Bode, Michael Dodge, Kat Hermes, Scott Lange, Katherine Mayberry, Eric Orive, Sarah Stark, Kate Tubbs, and Riley Van Ess.  The production is ensemble-directed, with stage management by Kaeleb Cogswell.  Tickets to The Seagull are $15 for adults and $10 for students and seniors.  Performances take place at the Dog Story Theater, 7 Jefferson SE in Grand Rapids, and tickets are available at www.dogstorytheater.com.  A full listing of Lake Effect Fringe Festival events, taking place throughout the month of February, can be found at www.lakeeffectfringe.com.