ROCHESTER—Meadow Brook Theatre opens its 2020 season with Noel Coward’s Blithe Spirit, running January 8 through February 2. Tickets range from $36 to $46 and are available by calling the Meadow Brook Theatre box office at 248-377-3300 or going online at www.ticketmaster.com. Student discounts are available at the box office. Groups of eight or more should call 248-370-3316 for group pricing.

While researching an upcoming novel, Charles Condomine invites an eccentric medium, Madame Arcati, to his home to conduct a séance with his wife, Ruth, and some friends. He doesn’t know what to expect, but he certainly didn’t think it would be the ghost of his late wife, Elvira, whom only he can see. Elvira is nothing like Ruth, and Charles finds himself frantically caught in the middle.

The cast includes Timothy C. Goodwin as Charles Condomine, with Leslie Ann Handelman as his late wife, Elvira, Dani Cochrane as his current wife, Ruth, and Lynnae Lehfeldt as the “happy medium” Madame Arcati. Stephanie Nichols, Phil Powers and Katie Akers round out the cast. The productio is directed by Travis W. Walter. Terry W. Carpenter is the stage manager with scenic design by Kristen Gribbin, costume design by Corey Collins, lighting design by Phillip Hall and sound design by Mike Duncan. 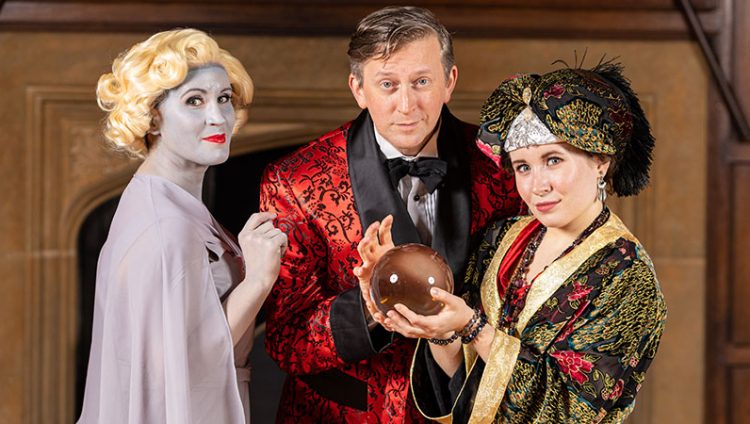