A Host of People

A Host of People is a theater company born in Brooklyn in 2010 and raised in Detroit since 2012.  The company is led by co-directors Sherrine Azab and Jake Hooker, whose work has been seen, together and separately, in New York (The Bushwick Starr, The Chocolate Factory, The Kitchen, HERE, Dixon Place, etc.), Berlin (Ida Nowhere, The Lyn-Lin), San Francisco (Intersection for the Arts) and Detroit (HomeBase, The Play House, Artlab, The Sidewalk Festival For the Performing Arts).

We create art around these questions: How can we host more people into theatrical works that are complex and multifarious; work that is poetic, visual, non-conformist, and frees the viewer’s imagination, curiosity and spirit? We draw from existing literary works (Time! and/or Progress?), collaged texts (Life Is Happening To Us Again), historical figures (The Modern Woman), and social movements (The Harrowing), among other sources. In addition to producing 1-2 shows a year, we curate a series called Performance, Potluck, and Punch that pairs two short, living room-sized performances in our home and invites our neighbors in for the price of a dish to share. We invite audiences into our art as we would guests into our home, whether it is in our house, on the street, in a garden, or in a theater.

September 07, 2019
DETROIT—Cleopatra Boy debuts from A Host of People, September 13-28, 2019 at Andy in Detroit. Cleopatra Boy is an original play that uses the history... Continue Reading 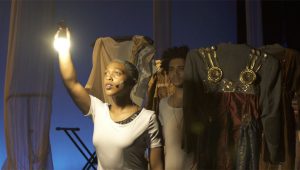 “Re-Release Party” takes audience to space for a wild ride

Review November 07, 2016
DETROIT — Space exploration and the age-old question: “Is there anybody out there?” gets a fresh and intriguing treatment via Detroit performance company A Host... Continue Reading 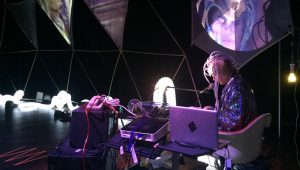