Simeon Heyer and his brother Nat purchased the Jam Handy building in the October 2010 Wayne County tax action for a mere $13,000.

The Jam Handy Organization was started in 1932, located on East Grand Boulevard in order to be near his biggest client, General Motors, and its 80 affiliated companies. Over the subsequent decades, Jam Handy (an interesting gentleman on his own accord) went on to produce over 25,000 instructional films on seemingly every conceivable subject, including more than 7,000 training films for the U.S. Armed Forces during World War II. If you’re curious about what these films looked like (and you should be!) check out his archive.

While the Jam Handy Organization has long ceased to exist and its once sprawling network of buildings lining East Grand Boulevard has mostly disappeared from the landscape, its legacy lives on. Behind the scenes and around the world, numerous technical advancements that continue to shape the contemporary film industry owe their existence to the Jam Handy Organization. And now, here in Detroit, with the ongoing revival of the JH’s former headquarters and main film stage, another scene–and a whole different kind of Jam Handy production–is taking place.

The building is now an event space.

A Host of People premieres new work November 4 in Detroit 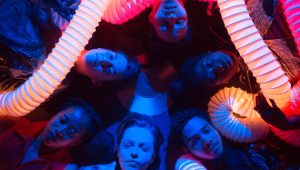