SAUGATUCK, Mich.–Although the title hints at fairy tales, the musical Once, which opened Friday at Mason Street Warehouse, is a modern-day romance with no guarantee of happily ever after.

But be sure to arrive early for this season finale production. From the moment the doors open, a full half hour before the play officially begins, the bar on stage is serving drinks to patrons who venture there and the company of musicians bursts into song and dance like they can’t help themselves. 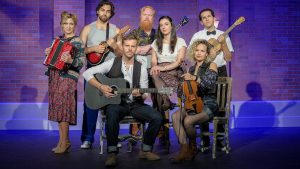 Based on the 2007 film by John Carney, the 2012 Tony Award-winning musical features the haunting melodies of Glen Hansard and Marketa Irglova. But the pre-show action includes an explosion of traditional Irish songs such as “The Wild Rover” that found the audience clapping and singing along to the “Nay, No, Never” refrain. Without realizing it, the audience is being transported to Dublin where the story takes place.

Then the melodies change and the play begins as a somber, scarf-clad young man pulls out his guitar and sings the mournful, heart-wrenching “Leave.” Out of the shadows comes a quiet voice with an Eastern European accent. Just that simply we meet the Guy (Brian Oglivie) and Girl (Julie Benko) whose shared passion for music, daring dreams and sad situations weaves a romance that is more about inspiration and support than steamy kisses.

Their story mirrors the music–sad but sweet minor-key melodies that seem to arise from the heart more than the vocal chords. A frustrated musician and song-writer, Guy, repairs vacuums at his father’s shop and dreams of the girlfriend who abandoned him for New York. Girl lives with a group of Czech immigrants and treasures moments when she can play piano in a music shop. With her disarming spunky frankness, Girl encourages Guy to pursue his dreams and record a demo CD of his songs.

Oglivie does a great job as the “Hoover man,” slowly warming from depressed to hopeful, romancing Girl with just enough apprehension to be convincing without getting comical. Benko is a delight as Girl, with plenty of sass to control the conversation and yet the tenderness to win devotion. Their voices blend beautifully on “Falling Slowly”.

Every one of the dozen cast members is a musician as well as an actor, singer and dancer. Some of the best scenes are when the guitars, violins, cello, mandolin and percussion instruments join in. In the Act I finale, for instance, Guy is performing the love song “Gold” at a talent night. The rest of the company is seated on stage as his audience, but they soon join in not only playing their instruments but dancing as they play. They even climb up on the chairs as they dance, never missing a beat on accordion or cello.

Director Kurt Stamm has assembled an amazing cast for this challenging feat. Chris Blisset doubles as music director and plays Billy, the music shop owner who fancies Girl as well and becomes a member of the band. Blisset whips the piano on and off the stage like he is twirling a top and plays guitar and percussion as needed. Cory Goodrich portrays the accordion-playing Baruska, Girl’s predictably old-world mother. Larry Tobias is believable as Guy’s supportive Da. Alex Canty wins our hearts as the enthusiastic Eamon while Svec (Alan Menendez) provides comic relief.

One of my favorite scenes is the loan application. Impressed with Guy’s singing ability, the bank manager (Jenn Chandler) confesses she is a singer too. But the manager’s “Abandoned in Bandon” is hilariously horrible. All the action is mirrored wonderfully in the reactions of three company members portraying coworkers in the bank.

Jeremy Barnett’s set is as haunting as the music. Empty frames line the brick wall behind the bar while scattered window frames of various sizes are set off with candle-like light bulbs. The furnishings are a collection of tables and chairs that the company members dance on and off stage with exaggerated flourish.

Mason Street’s production is so entertaining; you may want to see it more than Once.