‘Unsportsmanlike Conduct’ at Outvisible has uncanny timing for world premiere

ALLEN PARK, Mich.–What could have started out for playwright Jeff Stolzer as a merely timely story connected to the #metoo movement has turned out to be ripped from today’s actual headlines in such a way that makes you think Outvisible Theatre is in cahoots with The White House to create the perfect moment to run Unsportsmanlike Conduct.

Noah Woodward (Jeremy Kucharek) is a big-time NFL Super-Bowl ring wearing quarterback. And he fits out expectations of a dude entirely full of himself, accustomed to groupie women and covering his bad behavior with good works like raising money for a leukemia charity. Kaylie Robbins (Danielle Wright) is a diner waitress who has a jones for Woodward even before she leaves her house to attend a fundraiser to which she has bought a ticket. She approaches him at the bar of the hotel. They end up in his room with a bottle of Tequila, and the rest, as they say, is history. 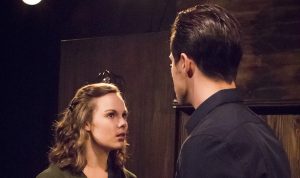 Or is it. The play opens up the morning after, with Woodward scampering around in his underwear and practically Photoshopped handsomeness, while Kaylie is plenty rough around the edges, the worse for wear at the hands of the Mexican Mr. Patron. The woman who got herself into Woodward’s Presidential suite is now more demure, skittish, apprehensive, and she definitely does not want to have morning-after sex. She leaves in a huff after accidentally hearing a phone conversation in which Woodward tells one of his alpha-male buddies about he bedded a “little slut” from the fundraiser.

What unfolds from here in the roughly 75-minute one-act play, ably directed by Adriane Galea, is a dance of he-said-she-said stories in which Kaylie claims that she was raped, and could not have given consent because of her inebriation, and Woodward claims she came on to him, got ticked off and wants his money in a lawsuit.

Stolzer weaves a set of happenings and facts and brings out some of this in exactly the kind of cross-examination we are likely to hear this week if and when Dr. Christine Blasey Ford testifies to the Senate Judiciary Committee about an alleged attempted rape by Supreme Court nominee Brett Kavanaugh when he was 17 years old.

Part of what we see on stage are scenes from the hour or so before Kaylee followed Woodard to his room but from alternate viewpoints–from his, and then hers. This is done well to surely stir conversation after the play, and to make the clarity of the events as murky as possible, just as lawyers try to do. Kaylee’s background, going back to high school, anti-depression drugs, and a suicide attempt.

The play is tight and benefits from feeling like an extension of the afternoon’ CNN newscast. But it has a few flaws in the script that absolutely tilt the argument in one direction. And there is a very good reason why Mr. Stolzer might want to revisit the script to tinker the balance back to more of a perfectly balanced teeter-totter. I will say no more to avoid a spoiler. Too, as a male reviewer, I did not exactly pick up on it, but a woman commented to me that some of Kaylee’s dialogue and even a bit of stage action seemed off for the situation and not in the voice of a woman. Writing dialogue for the opposite sex can be tricky.

Ms. Wright does a splendid job of playing both sides of Kaylee–the sexy pursuer in the eyes of Woodward, and the reluctant, what-happened-last-night “victim.” Mr. Kucharek, though a bit small for a NFL quarterback, nonetheless embodies a “Tom Brady-like” persona. If he has never played bigtime high-school or college sports, he certainly did his prep, nailing the sense of entitlement that goes with being handsome and the coddled athlete. In a scene that reminds me of David Mamet’s “Oleanna,” the two actors superbly execute a change of power in this story.

The “MeToo” movement since the Harvey Weinstein incident came to light has changed the dynamic of the workplace for good, and even dating. But these stories are not cut and dry and are subject to the political momentum of the movement. While Weinstein, Charlie Rose or Matt Lauer have few supporters, a story by an accuser of Azis Ansari has drawn much criticism, including from noted feminists, for charging the actor/producer with sexual harassment and conflating a bad date and bad judgment with a #metoo event.

Set design is by Don Corbin and lighting is by Harley Miah. The set in the small space has to work hard. The big bed of the Presidential suite (please upgrade the thrift-shop-reject bedspread) has to be folded up like a Murphy bed, and then the piece converts to a desk. Mr. Kucharek has to do this twice, because we have to go back to the bed, and it is a bit cumbersome and time-consuming. But that is due to the intimate space, which overall plays to the power of the experience because we are just feet away from the action between the two actors.

As a world premiere, and winner of the Detroit New Works Festival last Spring, Unsportsmanlike Conduct is a perfectly timed and overall excellent work. And it will, or at least should, create some damn lively discussion on the way home after the show. Was it rape? Or just a bad date? There are not that many seats in Outvisible’s performance space, so get your tickets now.