YPSILANTI, Mich.–It’s amazing to see what can happen between kids on a playground. Such is the setting of Spinning Dot’s current production of The Mountain, a play by Chelsea Woolley for young audiences that most parents and grandparents who will be along for the ride will get more out of than the kids I dare say.

Aya (Aya Aziz) comes upon Nick (Forrest Hajkal) who is sitting amidst a geometric dome climber found in many school playgrounds. Nick is an introvert, a rock scientist wannabe, and this dome is his protective space that Aya enters, armed with a bag of her own imagination and magic, and a lot of hurt. 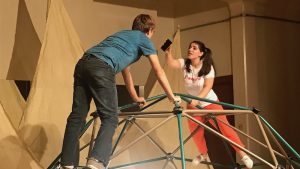 Aya wants a ride to the airport, and Forrest dangles the idea that his Mom might drive her. She has a drawing of hers from her school on which some mean kid wrote in big block letters, “Go Home.”

Aya is a refugee, probably from Syria, but certainly from the Middle East. Could be Iraq, Lebanon. It doesn’t matter. To her Canadian classmates, she is “other.” And while the kids meant to be mean, Aya took the message to heart. She does, in fact, want to go home, to be with her Bobo (her father.) She has tried over and over again to reach him by cell-phone, but there is no service in the bombed out home she has left, or been sent away from.

For Aya, everything is fixable and possible with her imagination. She pulls a small stone from inside her shoe, and tells Nick to swallow it as a cure against the viper-spider’s bite. He can ward off the Demon Pirate by throwing up a small can of spice into the air.

They are kids, playing like kids, looking for cures to their ills in their own imaginations and friendship instincts. Nick is not all innocent, though. Even he blurts out, “REFUGEE,” like it’s an insult, rather than a condition or situation.

The play is cleverly directed by Jenny Anne Koppera and Tyler Calhoun, with lighting by Calhoun, sound design by Tae Hoon Yoo. Yoo also doubles as the demon, Fulad Zereh. Costumes are done by Koppera and Monica Spencer.

As I watched “Mountain, “ I could not help marvel at the small audience that had gathered at The Riverside Arts Center: A white mother with her African-American daughter; a few families of Asian origin; a same-sex gay couple with their children; two Middle-eastern families; and of course, one single white male. And I thought–how glad am I hat I live and work in this community of thriving, peaceful diversity, that we all came together to see a small two-hander play written by a playwright on the other side of the ocean we had never heard of on the second floor of an Ypsilanti Arts building on a rainy Saturday morning at 10 AM.

Ms. Aziz and Mr. Hejkal beautifully capture the vocal cadence and body language of elementary-school students despite being, I believe, in college or just out.

The two kids together fed off a demon. But then Nick takes the play-time to a bad place–war, complete with him blowing up his lunch-sack and popping it to sound like a bomb. Not surprisingly, this plays badly with Aya.

I am not describing too much of the story. And I doubt seven-year olds and eight-year olds are reading this review anyway.

There are children being killed daily in Syria, Yemen, Iraq, Lebanon…mostly because adults can’t stand the idea of getting along despite religious differences and tribal traditions. As I watched these kids, a white infidel from Canada and an Arab use their imaginations to solve their differences and hurt.

Mountain isn’t so much political, as it is a story about the power of friendship. And it has a happy ending.

Editor’s Note: While their were kids in the audience from 3-12 it seemed to me, the ideal age range for The Mountain, I think is probably 6-12. There are some loud noises and scary lighting effects (for some kids), but I did not witness any kids being too scared to take in the story.